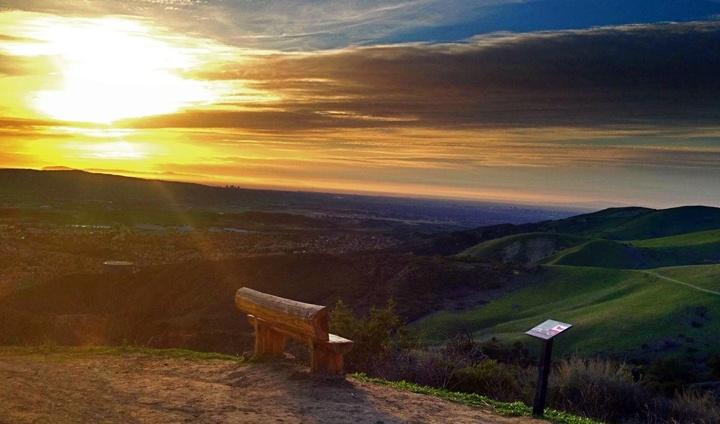 If you ride Whiting Ranch Wilderness Park in Orange County, be sure to go to the top of Dreaded Hill. There you will find a beautiful hand crafted, split log cedar bench overlooking the valley and hills...

If you ride Whiting Ranch Wilderness Park in Orange County, be sure to go to the top of Dreaded Hill. There you will find a beautiful hand crafted, split log cedar bench overlooking the valley and hills to the north and communities and ocean to the west. In the center of the back rest a bronze plaque reads:
“Mark J. Reynolds, 1968-2004, He was doing what he loved.” 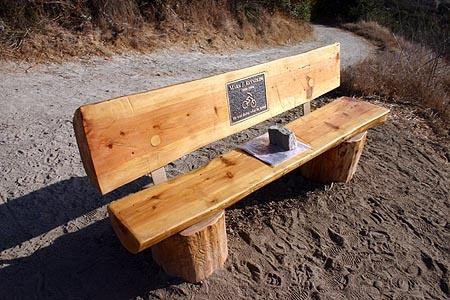 You might remember the story of how Mark died on January 8, 2004, when he was attacked by a 112 pound mountain lion while fixing a broken chain during a ride at Whiting Ranch. You may also remember that later that day the cougar attacked again, taking Anne Hjelle clean off her bike.

Fortunately, Anne was riding with her good friend Debbie Nichols, who grabbed hold of her and would not let go while a group of 5 mountain bikers (Mike Castellano, Jeremy Collins, Dwayne Jenkins, Diego Lopez and Nils Magnusson) hurried to help them and chased the cougar away by throwing rocks at it. Later that night the cougar was shot and killed by Sheriff’s deputies. Mark’s death was only the 6th by a cougar in 114 years in California, and was the first ever recorded in Orange County. Anne’s attack and escape was one of the most remarkable stories of wilderness survival most people have ever heard. 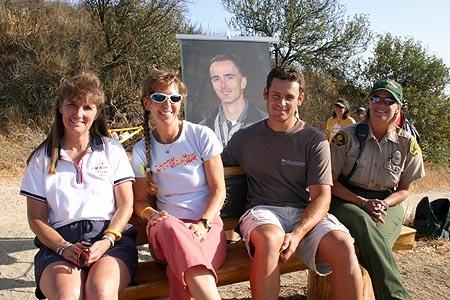 In the days of mourning following his death, a group of Mark’s closest friends decided it was important to place a lasting memorial in his honor at Whiting Ranch Wilderness Park. Nine months later, on the pleasant afternoon of October 10, 2004 at 3:00 p.m., 40 people gathered at the top of Dreaded Hill in a ceremony to dedicate Mark’s bench to the park. The ceremony was a gathering of people close to Mark and the events that took place on that tragic day back in January. The bench is a lasting memorial for all to see, but the story of how it got there is a tribute of hard work and dedication to the memory of a lost friend.

After Mark’s service in January, Melissa Fletcher immediately took on the role of working with the Park Rangers at Whiting Ranch to get a memorial approved. She contacted Park Ranger Bobbie Tumolo, who agreed that a tribute to Mark was important and gave Melissa guidelines for the type of bench the Park would allow. Melissa, Greg Norombaba, and Jerrie Beard began contacting landscaping companies to locate a bench that would fit the Park’s specifications. Two landscape companies wanted to donate benches once they heard the story, but neither of these benches met the requirements of the Park. Melissa then talked with Sean Regan, Mark’s best friend, about the bench. Sean said he had seen a split log bench on a trail in Encinitas that would be perfect Mark’s memorial, and he said that he would like to make a bench like that himself. Now the hunt was on for a log.

Finding a log proved to be a greater challenge than expected. For over a month, Melissa made phone calls and enlisted the help of several friends to find a log, but they had no luck. Then in early July, Melissa was talking with Bev Brown of Rim Nordic Racing about a race she was putting on later that month in Mark’s honor. The race was the Mark J. Reynolds Memorial Mountain Bike Stage Race, with proceeds going to the Mark J. Reynolds Memorial Children’s “First” Bicycle Fund. After hanging up the phone, Melissa realized that Bev might know somewhere to find a log for the bench. She called Bev back, and the search was over. Bev and her husband Kerry had a cedar log that they had cut from their property that would be perfect for the bench. They also had a small cedar log for the base. Bev and Kerry were happy to donate the logs, as they had fond memories of Mark participating in their events and bringing new racers with him year after year. 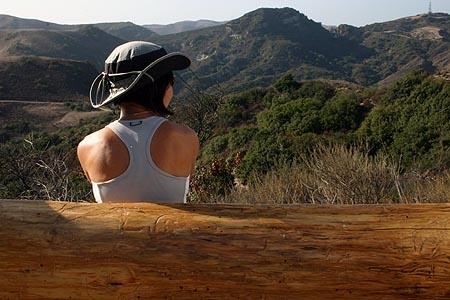 Sean, Greg, and Melissa drove to Rim Nordic a few weeks after the Stage Race to collect the logs. Three weeks later, Sean called Melissa to tell her the bench was done. On the final weekend of September 2004, Melissa, Sean, and Ann Hall drove up to Whiting Ranch with the bench. Ranger Tumolo led them to the top of Dreaded Hill, and they cemented the bench in place. The dedication ceremony was scheduled for October 10, and Melissa and I spread the word to Mark’s family and friends. The ceremony was one of tears and laughter, on a beautiful Autumn day.

PHOTOS
*The bench dedicated to Mark J. Reynolds sits at the top of Dreaded Hill in Whiting Ranch Wilderness Park in Orange County.

*Bev Brown, Melissa Fletcher, Sean Regan, and Park Ranger Bobbie Tumolo. There would be no bench in Mark Reynolds’ honor if it were not for the efforts of these four incredible people.

*Tomoko Kuta takes in the view from the bench while thinking of Mark. Come out and enjoy the first ever mountain bike landmark in the world!

BIKE FUND
Gary and Dona Reynolds have established a charity in their son’s honor to continue his tradition of giving needy children their first bicycle. The charity is the Mark J. Reynolds Children’s “First” Bicycle Fund, a 501(c)(3) not-for-profit organization. Anyone wishing to donate to the fund can do so via mail or internet: