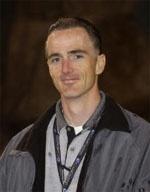 Mark Jeffrey Reynolds, a native of St. Joseph, Missouri, was born March 17, 1968. After graduating from MU in 1991, majoring in Business and Finance, he joined ICI Paint as a sales representative and had been promoted to Western Region Sales Manager before accepting a Sales Manager position in 2001 with Carmichael Training Systems (CTS) in Colorado Springs, Colorado.

In the Fall of 2002 Mark joined OMS Sports in Anaheim, California, as a MX/SX Senior Account Executive (Sports Agent for professional motocross riders).

It was a passion for biking that drew Mark Jeffrey Reynolds, again and again, to the trails in south Orange County where a cougar tragically ended his life on January 8, 2004. Reynolds' co-workers at the Anaheim office of OMS Sports, a Kentucky-based marketing firm that represents extreme sports athletes, described the account executive as an outgoing, competitive cyclist and motocross racer.

"I can't begin to tell you the amount of grief and pain our company and clients are suffering right now," said company President Fred Bramblett. "I'm numb. This is so unreal. Mark was a very loyal, very hard-working employee here at OMS Sports and will be sorely missed by all of those he came across. Such a tragic, tragic event."

A family friend, Ruth Gaddie, said Reynolds' parents in St. Joseph, Missouri, are "taking comfort knowing that he died doing what he loved most." But, she added, "The fact of how he was killed is very disturbing to [them]. They're in shock." Cycling, Gaddie said, was the love of Reynolds' life.

He did it in his spare time, on vacations, at races and--by extension--for a living. He was such an avid biker that he left Colorado a couple of years ago and moved to Southern California so that he could ride yearround, though his friends say even bad weather in Colorado Springs didn't keep him off his bike.

Mark, a former employee of Carmichael Training Systems in Colorado Springs, Colorado, worked for CTS from May 2001 through August 2002 before moving to California to work as an account executive with OMS Sports in Anaheim, according to the Colorado Springs Gazette. Reynolds' former boss, Chris Carmichael, recalled spotting bike tracks in about six inches of snow. "I remember thinking, 'What guy is riding his bike on this day?'" said Carmichael, who coaches five-time Tour de France winner Lance Armstrong. "At the bottom of the canyon I looked up, and it was Mark. He was just a die-hard."

The Missouri native was committed to cycling and was in great physical shape after losing about 40 pounds. But his friends said cycling was not the only thing that defined him. He was friendly and generous, with a knack for making people feel better.

"If you were getting a little stressed, he'd just give you a goofy look and say, 'You need a hug,' " said friend and former co-worker Kevin Dessart. "And then he'd give you a hug just to throw you off and get you out of your funk.... A real good guy."

The last several Christmases he bought bikes and gave them to poor children. It was something he did quietly, without seeking attention or asking for a lot of help.

Though they did not know each other, the passion Mark had for biking was a passion he shared with Ann Hjelle who frequently rode the same mountain biking trails at Whiting Ranch where Mark was killed. She was attacked the same day by the same cougar, causing experts to rethink all their paradigms about mountain lions.