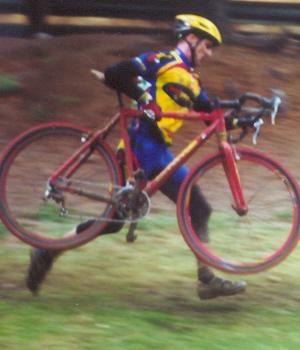 Mark was a long time Celo member who even after moving away from San Diego continued to support and ride with the club.

Mark joined club members on the local New Years Day century.  Mark was active in the club serving on the board, bringing in new sponsors, and because of his generous spirit he always attracted new members. In addition to local Road, Mt. Bike and Cyclo-cross events, Mark represented the club at World Cup Mt. Bike races and Cyclo-cross Nationals.

Mark joined the club after he moved to San Diego from Texas.  Celo was almost exclusively a road club at the time but his enthusiasm for mountain biking would change that.  With encouragement from Mark, the clubs representation at local Mt. Bike races jumped.  While serving on the board he was instrumental in changing the reimbursement policy to include all USA Cycling events including Mt. Biking.  Mark discovered Cyclo-cross and soon had a handful of members joining him at the local races.  Since then others who love cross have joined the club to the point that Celo is the dominant Cross club in Southern California.

As competitive and driven as Mark was on race day, he was generous the rest of the time.  It was not at all uncommon to see him helping someone out, on or off the bike.  His entire adult life Mark gave away as many bikes as he could afford to needy children at Christmas time.  While a Celo member, he did so in the clubs name even though the majority of the time and money to do so was his own.  Mark was very close to his parents who live in St. Joseph Mo. He gained his love of 2-wheel sports from his days of racing motor-cross with his Dad.

He moved to Orange County to take a position at OMS Sports, where he worked as a sports agent representing motor-cross riders.  He loved the job and was very thankful for the opportunity.  It allowed him to combine his first sporting love with his sales and marketing experience gained over the years.

When asked how are you doing, Mark would always say with a big smile “I’m always happy when I’m with my friends”. The truth is we were always happier when we were with him. We will miss him.